There is no exact birth time for Greta Thunberg’s chart. This post goes through the Solar Arc (SA) charts I have used to do rectification work on her chart. Many of the Solar Arc hits to her natal planets do, however, tell the general narrative of her young life, regardless of her exact birth time.  (Click on charts to expand.) 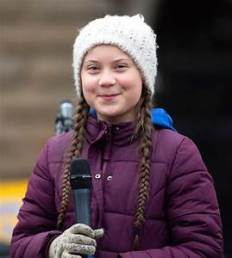 The ruler of her chart, Mercury R, sits on the Midheaven (public standing/status). Mercury will go direct by progression when she is 21/22. Her father is  a Gemini, and often children have ascendants similar to their parents Sun signs.

The chart has activity in the upper half, denoting Greta taking her place in the outside world. Her passionate Venus/Mars conjunction in Scorpio, in 6th house, square her N Uranus in Aquarius, (hopes/wishes/causes) denotes her passion directed to a cause, namely climate change which is a 6th house matter.

Her N Jupiter R in Leo is trine N Pluto in Sagittarius, gives her the confidence and ability to speak up publicly and understand global issues. Her Moon in Capricorn, ruled by Saturn, (earth/responsibility/discipline) is trine (positive) her natal Mars in Scorpio (transformative) also in 6th house of climate. She finds it easy to take action, and as her Mars is in a fixed sign, she has strong/fixed deep emotions about the climate.

Her Chiron (wound) in Capricorn, is conjunct the Sun in Capricorn, in 8th house, which would give her “existential angst”. Chiron is also semi-square her Uranus/Venus square – she would be compelled to make climate action her cause, as she sees it as a direct threat to her existence/life (8th house). 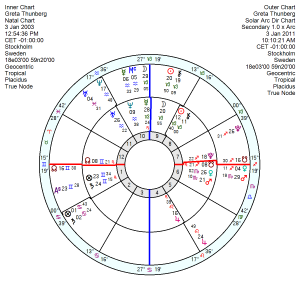 At age 8 she received instruction on climate change. Her SA Ascendant was approaching her natal Saturn, the planet of responsibility. Her natal Sun also conjoined her Moon in 9th house, of global issues, world view, big picture ideas. The SA North Node, also conjoins her Ascendant. She has been “enlightened”. However, as her Ascendant is quinqunx (150 deg) her natal Sun, it releases her existential fears, as it activates her Sun semi-square Venus and Uranus.

Her Illness is diagnosed, when SA Mercury conjoins with her Natal Neptune in the sign of Aquarius. Her SA Neptune is also coming to square her natal Mars in Scorpio in 6th house, also the house of illness. Mercury, Neptune hits are common in nervous disorders and would account for her “muteness” going into a world of her own. Her SA Venus, which is semi-square Chiron natally, is again activated, as it is conjoining her South Node in 6th house. 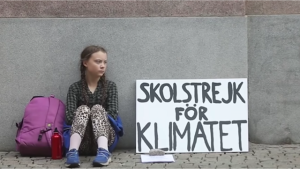 I welcome any comments re Greta’s rectified birth time. Of course, any public announcement of her exact birth time, would be a huge bonus for mundane astrological work and help shed light on how her original idea of “Student Strike for Climate” will evolve in the future.

Blessings to you Greta,

Many astrologers are talking about how Trump is entering into a very lucky period with his progressed (p) Venus meeting his natal (n) Jupiter Retrograde (R) at 17’27 deg Libra in his 2nd house.

This hit will be in effect before 1 May 2018 – and beyond 1 Jan 2019, strongest around 14 June 2018 (yes his birthday) and denotes, other than love and marriage, becoming popular, film star mannerisms.

Taking a closer look at his chart, his natal Jupiter R, is actually midpoint his natal Sun and Pluto, (pursuit of happiness and fortune).

However, Trump’s n Pluto is mid-point his Saturn and Mars, denoting brutality, rage and fury of destruction.

So during this lucky p Venus, n Jupiter meet up, we also have p Venus midpoint n Sun and Sat/Mar midpoint and n Jupiter midpoint Sun and the Sat/Mars midpoint.

The Saturn/Mars midpoint (harmful or destructive energy) will certainly place a dampener on any benefits gained from the lucky Venus/Jupiter conjunction.

As Jupiter has always been midpoint Sun/Pluto and consequently the Saturn/Mars midpoint in his chart, it highlights how his successes have often turned into bankruptcies.

Also note how his solar arc or directed (sa) ascendant is coming to square his natal Pluto. This hit comes into orb on 5 September 2018 – and goes beyond 1 Jan 2019. This hit by square will be the first in his lifetime when his person (ascendant) meets up with the restrictive saturn/mars (advancement difficult, obstacles caused by other people, illness, separation, mourning). He had a sextile by  sa ascendant to his natal Pluto and Sat/Mars midpoint in his early 40’s, but now at age 72 the square has formed…

Brief comments on other secondary progressions and solar arc directions.

Progressed Mars in Libra, 2nd house, making positive aspect to Natal Pluto in 12th house, which is always midpoint Sat/Mars. He will make a huge effort to cover up his past shady dealings.

Directed Pluto in Libra, 2nd house, making positive aspect to natal Uranus in 10th house. This is ending on 11th June, will his impact on the office of President and the changes he has made taper off now…

This one is huge, sudden revelations will continue to pour out regarding his hidden (12th house) dealings. He will continue to shock and create disruption and always be highly agitated. Uranus/Mars combinations are also indicative of car accidents and other accidents in general.

He will continue to use social media to get his message across…His sa ascendant is now as 8-9 deg Scorpio in his 3rd house of communication…His approach (ascendant) is do or die (Scorpio) or on the war path to achieve his nationalistic aspirations ( n Mercury in Cancer in 11th house).

He will continue to do his duty (sa Mercury in Virgo) in implementing/communicating  his shocking  (Uranus) ideas  to his base, but he might hit a snag, as the square denotes difficulties.

The formation of an important personal connection. He will probably meet up with Kim Jong-un. Note: 24th May 2018 – Meeting with Kim Jong-Un cancelled. As his natal Part of Fortune, opposes his ascendant 28 Aq, and his sa Moon also now at 0 deg Pisces opposes his sa North Node and natal Ascendant, this meeting was called off…

This one is very interesting as it ties in with the p Venus/n Jupiter R conjunction.

Natally his Uranus makes a Saturn/Pluto, Mars/Neptune midpoint aspect which makes fulfilling the promise of this trine difficult. However, his natal Jupiter/Uranus trine, has always got him out of trouble, as it is the “Thank the Lord” aspect.  With the lessening of the p Venus/ n Jupiter R conjunction due to the Saturn/Mars midpoint, combined with the sa Asc to Pluto which also has the Saturn/Mars midpoint aspect, we can only speculate how his “lucky aspects” will turn out. Perhaps this time, not as expected.

This is a lucky aspect, and his sa Jupiter falls in his 4th house of family, trining his Mars in 12th. If all goes belly up, he could negotiate a good deal for him and his family… In any case he will continue to benefit his family business..

He will continue to cover up his foreign/political business ties…His natal Neptune R in Libra makes many midpoints in his chart, one stands out, Neptune midpoint Sun/Jupiter, which is the signature of “the crook”.  At present we are witnessing how his past ties with the shady world are coming to the fore. More to come here, as the many midpoints his retrograde natal Neptune makes are too numerous to mention at this point. His natal Neptune R only makes 1 aspect in his natal chart, a separating square to Mercury. With sa Venus coming up to conjunct his natal Neptune – disillusionment will reign.

As mentioned before in my posts on Trump’s chart, his Pluto midpoint Saturn/Mars is the most difficult in the chart. Now at age 72 his ascendant will square this midpoint, and create some very challenging times for him, given his natal Pluto is in his 12th house of “self-undoing”, secretive dealings and in mundane astrology, hidden enemies.

Given he has other “benign” aspects by secondary progression and solar arc, how will these counteract his other “malefic” aspects? To my mind the saying “count your losses and run” would now be the wisest course of action.

The announcement that SBY was suspending cooperation with Australia, came through on 20 Nov 2013 at 5.13 pm AEDT.

The T moon was directly opposite, TA’s Venus (Venus return in his SR chart!)

Read more about TA’s natal chart and his Venus return. His Venus falls on Australia’s Mercury/Chiron and opposite our Neptune. http://wp.me/p45rEg-J

The T Moon in Gemini (communication) also fell directly on our Neptune and opposite Australia’s Mercury/Chiron in Sagittarius which is an aspect of intrigue, spying and miscommunication, especially with foreign powers!

Transiting Pluto is now exactly conjunct Australia’s Sun in Capricorn. (Ebertin – Martyr of own ideas. The desire to exercise power, the craving for rulership and disadvantages through the former.)[1]

Transiting Mars fell in Australia’s 7th house of national “friends and enemies”. (I use the National chart relocated to Canberra which has a 12 deg Pisces Ascendant.)

Mr Abbott needs to quickly learn a lesson in diplomatic communication styles, especially relating to the South-East Asian culture! His handling of this matter has directly placed his political policies (stopping the boats) in jeopardy.  It is an amazing example of “foot in mouth”, but not surprising when looking at his natal chart.