As most of you know, Australia’s Federation chart has an exalted Moon in Taurus. In the Melbourne chart, it forms a separating grand trine to Sun/Saturn in Capricorn, and to Mars in Virgo. 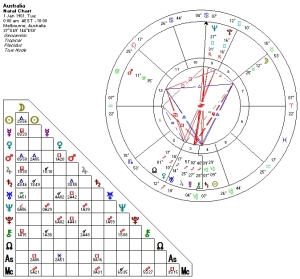 Given that Uranus is now again in Taurus, what can we learn, (given that very few of us have experienced Uranus in Taurus), about this transit and how it will impact our national politics.

Many of us expected the recent election to bring about Uranian change/upheavals. Well in one sense it did, as opinion polls incorrectly predicted the outcome. But the government did not change, Uranus in Taurus dug its heels in and revealed the “ fixed, stubborn” streak associated with the sign. Of course, Venus, the ruler of Taurus conjunct Uranus, added an extra streak of stubbornness..

Well then, what can we expect with transiting Uranus in Taurus, being a major transit during the term of this new government and off and on triggering our grand trine in the earth signs?

Let’s go back to when Uranus was last in Taurus and look at what radical, new amazing things (Uranus) the government of the day achieved.

In 1934, Joseph Lyons was the PM and headed up the United Australia Party (UAP), (yes strange synchronicity with this election as Clive Palmer revived this party recently).

All the action had occurred in 1931, when Lyons split with the ALP and formed the UAP, mainly due to disagreements on how to handle the economic effects of the Great Depression. Uranus was in Aries, then, and yes the action is understandable, given the T Aries Uranus trine to Australia’s natal stellium in Sagittarius.

He died in office 7 April, 1939, the first Australian PM to do so. Robert Menzies then took over the leadership, until 1941, with the Labor Party under Curtin taking over in October 1941 (whilst Uranus was R in last degree of Taurus).

Overall, Lyons has been described as “leading an unadventurous government”? Lyons was a very popular PM, and used the media of the day newspapers, radio and flying, to connect with people. He had very orthodox economic policies, and believed in cutting government expenditure to pay down debt.

The list of notable legislation during his Uranus in Taurus terms, was very short, the most notable and compatible with Uranus in Taurus being the Income Tax Assessment Act 1936 (ITAA36) a new primary statute for the collection of income tax in Australia. It is still in force today, thousands of pages, with of course many amendments added over the last 84 odd years. This Act now covers those issues we went to the election over, namely negative gearing, franking credits, capital gains tax albeit they were added during the years Uranus made its continued cycle through the zodiac signs.

Changes proposed to this Act were rejected by Australians recently and looking at our chart, it is little wonder with the natal Moon Taurus trining Sun/Venus in Capricorn. We do not like changes to the things we value.., not to mention other changes proposed at this election namely gaining royalties/employment from mining…

Even transiting Uranus with applying aspects albeit a bit wide, did not give us a push to make changes, in fact the opposite happened and we dug our heels in, resisted change and went against (Uranus) the expected norms of the political pundits. However, will the ITAA36, escape more radical Uranian changes when it faces its Uranus return during the term of this Government?

Whilst Uranus was in Taurus during the Lyons/Menzies UAP government, it seems global events shook our then very small nation, rather than domestic matters. The Uranian event of the abdication of Edward VIII in Dec 1936, giving us a new King and the outbreak of WW2 in September 1939 which led our country into war, definitely had the flavour of Uranus. 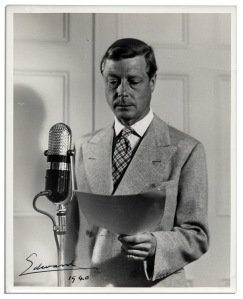 Overall, although some Uranus in Taurus influenced our domestic policies, it seems that this planet and sign impacted the Globe more drastically and we by default, as global citizens, became players in these events.

Seems to me that we in Australia, now again have to look to Global events having an impact on our nation, hopefully not abdication of our Monarch, and certainly not war, but perhaps the impact of climate change?  Make your own conclusions, as there could be many more, by looking at the bi-wheel below. Given that our SA Moon in Virgo is conjunct our Natal Mars in Virgo, an earth sign, and the ruler Mercury is trine by SA to our natal Jupiter in Sagittarius, perhaps global (Jupiter/Sag) action regarding the condition of the earth will impact us. In any case, our natal grand trine in earth signs, will be triggered by our solar arc Moon, and with T Uranus in the mix, it looks like Australia reacting to global events will give us an interesting few years ahead.