This midpoint is especially difficult, as his natal Pluto 10º Leo falls in his 12th house of “self-undoing”.

Ebertin describes this midpoint as, “Brutality, the rage or fury of destruction”.

A modern interpretation of this midpoint is:

“Demonstrating the will and intent to meet specific challenges; to completely master and overcome an arduous situation. Defiance; refusing to back down or give in under pressure. Build ups of stress and aggression which are prone to periodic and powerful release. The activation of survival instincts. An awareness of the destructive forces of ‘man and nature’. Harmful elements. Collective loss and anguish.”

Around mid September 2019, his solar arc Ascendant hits up this midpoint by square, at 10º Scorpio, which will trigger the above reaction. 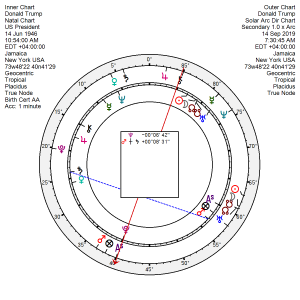 The 90º dial above shows how his Solar Arc (SA) ascendant has moved to an exact square to his natal Pluto. Also note that solar arc Chiron is forming a semi-square to the SA Ascendant, as it appears “Across the Dial” on the chart.

Below is an image of the same Dial with the pointer placed from the outer wheel, SA chart to natal chart. 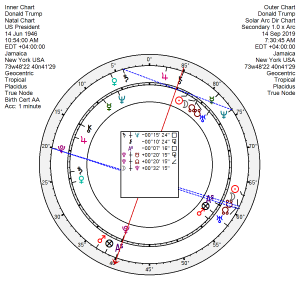 Here we can see Asc=Sat/Nept, which according to Ebertin represents “An emotionally depressing environment, oppressive family circumstances, emotional suffering caused by other persons, limitation of freedom”.

Ebertin does not give interpretations for Chiron in the midpoint structures, but we can ascertain from the planetary energies involved, that he will be involved in the suffering (Chiron) caused by his actions (Ascendant) of his 12th house Pluto (behind the scene transformative actions to control).

Asc=Moon/Pluto, is interpreted as “A violent reaction to environmental influences, the tendency to cause upsets in one’s environment through one’s conduct, many upsets”.

As we have already seen, Trump will have an extreme reaction to the Mueller report, and if Congress goes ahead with Impeachment, Trump’s reaction will be very strong indeed.