Kevin Rudd’s natal chart has a rare aspect. His natal Mars is Cazimi the Sun. A planet within 17 minutes of the Sun, by conjunction (at the same position), is said to be Cazimi, and at the “heart of the Sun”. This greatly strengthens the planet. It can be likened to “a man who has been raised up to sit beside the king”. 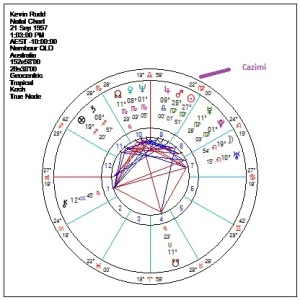 In Rudd’s chart, this is also the aspect with the closest applying orb. Mars falls 0A10 of the Sun, and therefore a standout in his chart.

Kevin Rudd resigned from Federal Politics on 13th Nov ca 8.20 pm AEDST 2013 after a very illustrious and controversial career. We have all read the comments on Rudd – his ability to polarise opinions, his popularity with the public, his obsession with the 24 hr news cycle, his micro-management/workaholic  tendencies, his sudden anger/abuse outbreaks, his sharp intellect and very honed communication skills.

As Astrologers we can all understand these comments, as Mars (great energy/aggressive urge) conjunct Sun (ego, power urge, personality) in the sign of Virgo (perfection seeking, exacting), with Mercury (intellect/expression) in rulership in Virgo, gives rise to the above descriptions of his personality and skills. As this conjunction has flowing energy (trine) to his ascendant, we can also understand, how readily the Sun/Mars conjunction is activated. It is simply his way of doing things, his modus operandi.

In his farewell address to Parliament, he commented on his rise to his position in life, from the son of a Nambour farmer to Prime Minister of the country.

How did the Cazimi aspect – which gives the native the ability and opportunity to be “raised up to sit beside the King – or in this case, even become the “King”, assist him and how did it lead to his fall?

When Kevin Rudd first assumed office, in 1998 his Cazimi Sun/Mars conjunction had progressed to his natal Venus (value/love) in Scorpio, in the 10th house. He had achieved a great ambition, at the age of 41.  As the planet Venus rules his 10th house of career, this conjunction indicates that he had achieved the career goal he greatly loved and valued.

During the decade before, he worked for the Queensland Government, this work commencing in 1988, when his SA Jupiter(opportunity/expansion) came in conjunction with his natal Venus (value/love) in 10th house (government administration). Also during this decade, his SA Sun/Mars was conjunct his natal Neptune in his 10th.

Rudd’s period with the Qld Government was very controversial – his cuts (Mars) to the Qld Public Service will never be forgotten. However, he also did lots of reform work on foreign language teaching (Jupiter) in schools. But this career fizzled out and lost its sheen (Neptune).

By 1998, his Cazimi Sun/Mars had moved out his 9th house which rules foreign affairs, so he left his Foreign Affairs career behind and entered into Government Administration. As his Sun/Mars progressed through the 10th house of public standing, career, he eventually achieved his goal of becoming a member of the Federal Parliament with the conjunction of Venus in 10th.

“The 4th of December 2006 was the day Labor’s “Dream Team” of Kevin Rudd and Julia Gillard combined to knock-off Kim Beazley and, indirectly, his then deputy Jenny Macklin. It was the day the tectonic plates of ALP politics suddenly shifted.” Greg Jennett[i]

Uranus in Leo is a generational planetary configuration, and is described as commanding will, expressive change or being self-centred and dramatic. The positive of this combination can be attuned to heart energy vibrations and high creative vision, however, mostly there will always be an element of self and arrogance combined with this.

Rudd had managed to work his way up in the ALP to take on the leadership of the party after 8 years in politics. Suffice to say, at this time he was also helped along with his SA  Pluto (transformation) conjunct his natal Midheaven in Libra (partnerships) –  the term “dream team” being a very apt description for this aspect – as astrologers we could also add in hindsight a very  “fated (Pluto) dream team”.

On the day he was elected to Prime Minister of the country, his SA Venus was square his Cazimi Sun/Mars. His elevation to this high office was also helped along by his SA Moon conjunct his natal Jupiter, and amongst other aspects, his SA Mercury (very strong planet in his natal chart), was conjunct his Neptune in Scorpio in his 10th house (career/status/reputation).

Astrologers say that big events in one’s life are often activated by challenging aspects, so it is little wonder that the SA Venus square (challenge) his Cazimi Sun/Mars gave him the energy to succeed in his aim for the highest office.

The SA Moon (women) conjunct his natal Jupiter (opportunity/benevolence/expansion) gave him added popularity status by having a female deputy (Julia Gillard) in his run for office.

However, the SA Mercury (intellect/expression) to his natal Neptune (illusions), made him the star of the show – the celebrity. We all looked up to him and saw him as the saviour for our future (Neptune), and a politician who would rescue us from the worn out Howard Government. My elderly Mother at the time, described him as an angel.

I also remember him saying “what you see is what you get”. How untrue this turned out to be. Not surprising really as Mercury/Neptune energies are considered that of fantasy or sleight of hand.

None of us, except perhaps, former public servants in Qld, really knew about his strong Sun/Mar mercurial energies listed above.  Perhaps the Labour Party knew about his reputation, but they overlooked this, too concerned with the sweet political victory Rudd could deliver.

On this day, his SA Cazimi Sun/Mars was square (challenge) his natal Moon. Well what more can I say.  His natal Moon (female) in Leo in the 7th house of partners/enemies succeeded in removing him from Office.  His SA Jupiter was also square his natal Pluto. (Some astrologers describe Jupiter/Pluto aspects as “win a million, loose a million”) and is very often found when people having achieved great success suddenly lose all.

Natally his Moon midpoints Uranus and Pluto, which signifies great changes by sudden force. Add the Sun/Mars to the mix and one can understand how the public (moon) was shocked to the core about the cruelty of this dismissal.

During 2013, the major events listed above occurred to Kevin Rudd. SA Neptune, the planet of illusion,( looking through rose coloured glasses, spiritual urge) was applying in square to his Cazimi Sun/Mars. It was an illusion to stand for the leadership thinking  that he could win the 2013 election.

When the Sun and Mars receive aspects from Neptune, loss of energy and power occurs.  It’s time to fade into escapist activities and very often people travel under such aspects. The political race lost is sheen for Mr Rudd. The people had seen through the illusion and rejected him.

It’s also time to move on, reinvent oneself, as SA Pluto (transformation) in Libra and positioned in his 10th house (career) by SA, squared his natal ascendant (assertion). He resigned.

I am sure that with this aspect from Neptune, he will tend towards more compassionate activities for a while. He also has an applying SA Mercury (intellect/communication) to his natal Venus (value/love) coming up next year, so he will find something he values and where he can use his intellect. Actually sounds like he might write his memoirs!

But for now it’s best he escape on a long holiday (Neptune) and gracefully contemplate his future.

I am sure we will hear from him again when his Cazimi Sun/Mars is once again activated by Solar Arc direction in the future.